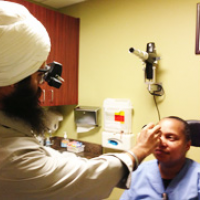 Optometry Board Accommodates Student’s Turban, Allows Him to Use Alternative Instruments

The National Board of Examiners in Optometry (NBEO) provided Ampreet Singh, a Sikh optometry student, a religious accommodation to use a non-standardized optometry instrument --- allowing him to wear his turban -- to complete the clinical skills portion of the national licensing examination. Recently, Mr. Singh successfully passed the exam, as well as the clinical skills evaluation, with a near perfect score.

The national exam, which consists of three parts, requires optometry students to wear a head-mounted binocular indirect ophthalmoscopy instrument (BIO) for the clinical portion (Part III). The BIO mounts on an exam-taker’s head and is equipped with a video camera. The video of the exam-taker's performance is sent remotely to a testing center to be graded. However, Mr. Singh, because of his religiously-mandated turban, was unable to wear the head-mounted BIO. He requested a religious accommodation to wear a different but functionally equivalent instrument – one that mounts on the exam-taker’s spectacles instead of the head and to be graded on-site by a proctor. The alternative instrument was not equipped with a video camera.

Mr. Singh had used the spectacle-mounted BIO throughout optometry school and explained that although the instrument is also used by other optometry schools, the NBEO adopted the head-mounted BIO as its standard instrument for the exam. The NBEO denied Mr. Singh’s request, citing concerns about standardization and maintaining the integrity of the examination and asked him to proceed with the exam without completing the clinical portion. As skipping the clinical portion would have significantly decreased Mr. Singh's chances of passing the exam, he refused and contacted the Sikh Coalition.

The Sikh Coalition advocated for Mr. Singh extensively. Initially, the NBEO refused to agree to a workable solution. The NBEO first provided Mr. Singh with a different version of the standard BIO. (The standard BIO has a cross strap that wraps around the head and the different version did not have this cross strap). Unfortunately, the substitute BIO also did not fit around Mr. Singh’s turban – a concern that the Sikh Coalition had previously expressed to NBEO. Consequently, Mr. Singh was unable to sit for his board examination.

After months of negotiations, the NBEO finally agreed to allow Mr. Singh to wear the spectacle-mounted BIO instrument and graded him on-site through the use of a teaching mirror and a proctor. This accommodation allowed him to complete the practical portion of his board examination while wearing his turban. “I am grateful for the countless number of hardworking hours spent by the Sikh Coalition legal team, leading to ultimate success in my case! The Sikh Coalition stands for human rights, which is the Sikh way of life and I thank them for it. Without them, I would not have been able to sit for my clinical boards,” said Ampreet Singh.

Ampreet Singh is presently completing his last externship and is set to graduate this month. He will begin his residency in optometry in July. We wish him the best of success and re-affirm our commitment that no person should ever have to choose between his or her career and faith.

"We applaud the NBEO's decision to provide Mr. Singh with a suitable accommodation consistent with his religious rights under state and federal law. It is alarming that the hurdle Mr. Singh faced in his career was not a difficult examination or coursework but the initial failure of a national licensing board to accommodate his religious beliefs, which in no way affect his ability to be an optometrist. This accommodation embraces diversity in the optometry profession and will pave the way for other Sikhs," said Gurjot Kaur, Staff Attorney.
Tags: eye care - mississauga eye care - Sikh Doctor - sikh rights canada